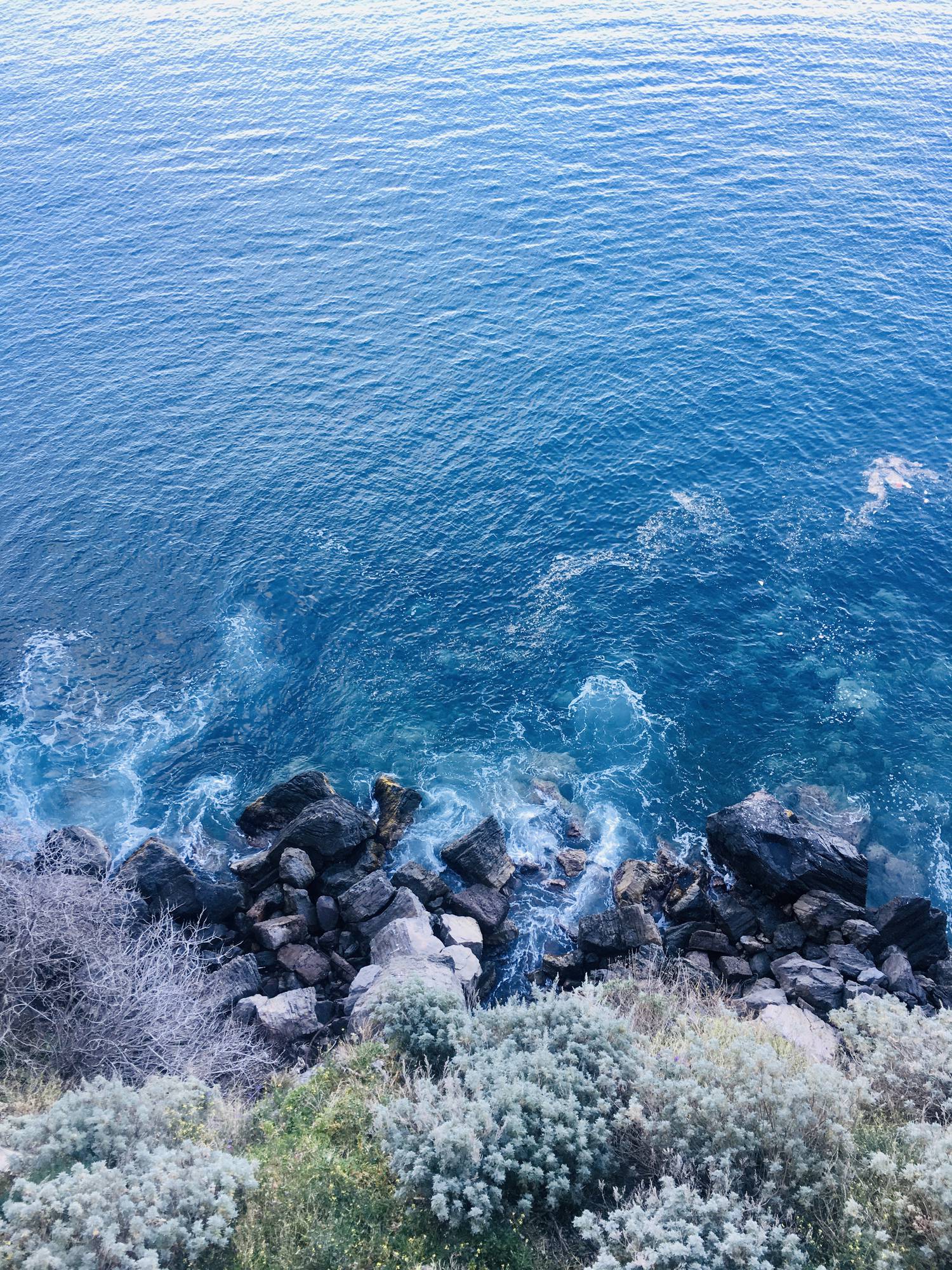 Lipari, Sicily: Is the Grass Ever Greener?

This is the second post in a series of blog posts featuring Lipari, Italy - you can read the first post here.

I leapt out of my perfectly firm double bed trimmed with fancy Italian lace the first morning. I was beside myself with excitement, waiting to see what the island held.

My apartment was perfect, it had everything I needed, including a small balcony. It was a stone's throw away from a volcanic beach. I soon found out I could indeed buy the wholefoods and soya milk that I obsessively crave from a small supermarket two minutes walk away.

The apartment was nestled within an expansive bay with lush green hills at either end and rows of small traditional shops facing the sea. There was a post office, butchers, greengrocers, various bakeries, gelaterias, bars and restaurants. But it was quiet, deathly quiet, almost like a scene from an apocalypse film. Many of the shops were closed, some even boarded up and covered with grey sea splatter.

Every day, at 2 pm when I finished work, I'd venture out and see what was going on - nothing it seemed? I knew there wasn't much to do on Lipari, it's one of the reasons I was drawn to it, but this seemed like it was going to be a challenge.

I could feel the weight of eyes upon me. Sicilians have dark skin, more so than I've seen on mainland Italy, and dark hair, so I stood out. I roamed around the island with my eyes down, looking and acting like a terrified sheep. I felt insecure, unsure and like an imposter.

After a few days, I found myself welling up with tears and old uncomfortable feelings of low self-worth rose to the surface.  I was surrounded by enchanting nature on a beautiful island, but I wasn't feeling good. Alongside questioning what on earth I was doing out here on this deserted island on my own?

I had to take stock, to be honest with myself. What was I actually doing in terms of my own self-care at the moment? The answer was zero. I was feeling bad, yet not taking any responsibility for my personal wellness.

I devised a plan, and I came back to the three things that always work for me - walking, yoga, and meditation - and I scheduled them into my new routine.

And within a few days, I was feeling on top of the world. Whatever had been lurking had gone, and I was finally free to enjoy myself and get on with this new adventure.

Is the Grass Ever Greener?

I'd made the mistake of falling hostage to the grass is greener syndrome. In my old life that would present as I'll be happier when:

I'm no longer under any illusion that any of the above can make me happy.

Still, I'd now transferred my desires onto physical places without realising - Italy. I was miserable in Yorkshire, and I'd convinced myself that as soon as I got to Italy, everything would be great again. I've done this before, many times.

Sometimes it takes many teachings of the same kind before we finally understand it.

The grass is greener where we water it, it really is as simple as that. I can't take credit for this quote - I don't know who said it. But it's accurate, and we can apply it to all aspects of our lives.

I'd been neglecting self-care and blaming Yorkshire for how I was feeling. It's easier to blame something or someone else rather than take responsibility for our actions.

Side note: grass can only grow and bloom if there are seeds to be watered, not withered weeds. Toxic friendships and monotonous careers are situations that cannot be watered to any advantage. They need putting in the recycling as soon as possible.

Every day after work, I'd set off along the coast road to sit on a wooden bench underneath an ancient fruit tree next to a private harbour. I'd sit watching the boats calmly bobbing on the water and relax and put work behind me for the day.

On my first day in the main town, I approached a cafe with tables outside nervously. I watched from a distance wondering if I was allowed in, a large man who turned out to be the owner called over to me: 'Ciao ciao senora' and beckoned me to sit down. I got out my phrasebook and tentatively ordered a coffee in Italian - he understood me, I was thrilled.

I'm sat outside on the cobbled streets, of Lipari drinking caffè americano while watching the passers-by and I'm feeling great. Handsome men of all ages with beards and mirrored aviators drive past on shiny mopeds. Feeling confident, I order a vino rosso (red wine) in Italian. The wine tastes like nectar. The owner brings me small plates of spicy olives, salty capers and crispy bruschetta, and I sit feeling very pleased with myself and a bit like a hero actually.

Every day I'd visit a different cafe. Every day I drank coffee and ate mouthwatering Italian pastries dusted with powdered sugar or pistachio gelato (ice cream). The price was always the same for both - 2.50 euros. These prices keep businesses ticking over, even in the winter months, which are inevitably quiet. I discovered that most of the shops don't open until March, which is why the island was so quiet, but it's a thriving and bustling tourist town in the summer months.

I learned that most of the work on Lipari is seasonal so locals can struggle financially. They work for eight months during the summer but often have no job for the remaining four months when a lot of businesses are closed. The government used to provide social security help but doesn't anymore.

Love is in the air

Valentine's day was approaching, and I could see plastic red roses in shop windows. I haven't been in a romantic relationship for years, yet there's no absence of love in my life. If anything, I have more love now than I've ever had.

'I'm annoyed at the amount of effort it takes to love yourself', I thought as I ordered a  Sicilian rosé and a margherita pizza. I was at a makeshift restaurant in Lipari town, it called itself a 'Cocktail Bar', but I'd describe it as a sizeable fancy tent in the middle of the main street. They had empty tables, so I sat down.

When the rosé arrived, I was hugely disappointed at its size. But as I soon learned, wine is not to be gulped as we do in the UK, no. It's for taking small mouthfuls and actually tasting it, swilling it around the mouth. Savouring it, smelling it, breathing it.

That old chestnut - self- love

Three Italian teenage girls are sat at the table next to me all wearing black and smoking. The eldest was making the most appalling rolled up cigarettes I've ever seen. They were clumsy and fat, and the paper wasn't correctly fastened, so the tobacco leaked out all over the table, but she seemed very happy with it.

When the margarita pizza arrived, it was enormous, and I knew I wouldn't be able to eat it all. I quickly googled: 'How to eat pizza in Italy?' If you're interested, you cut it into triangles with a knife and then eat it with your hands. Tangy tomato, creamy, bouncy mozzarella, zingy basil, all laid upon a golden, flakey, doughy yet crispy base. Happiness on a plate. Ten minutes later, it was all gone, and I wondered whether to order another...

Anyone who loves themself does not order a second pizza.

Self-love is such a pain, isn't it? That messy, complicated recipe of self-esteem, self-respect, healthy boundaries, and the commitment to physical, mental and spiritual fitness that seems impossible to achieve.

Related Post: DO YOU HAVE HIGH OR LOW SELF-ESTEEM?

Another day instead of turning right and walking into town from my apartment, I walked left for a change, up a steep winding path along the coast. After twenty minutes or so, I found some enormous overgrown steps leading down to the sea. When I got to the bottom, I was rewarded by an incredibly expansive, totally deserted pebbled beach. Surprisingly there was an abandoned, decrepit mansion sitting right there. I'm not sure when it had last been occupied as it was a total ruin and had wildlife sprouting out from all angles. It was obviously a remnant of Lipari's glory days.

I was blown away by how desolate it was, there was nobody around and no recent signs of life. Such stillness, such silence, such an absence of other human beings or the modern world. It felt timeless and beautiful. 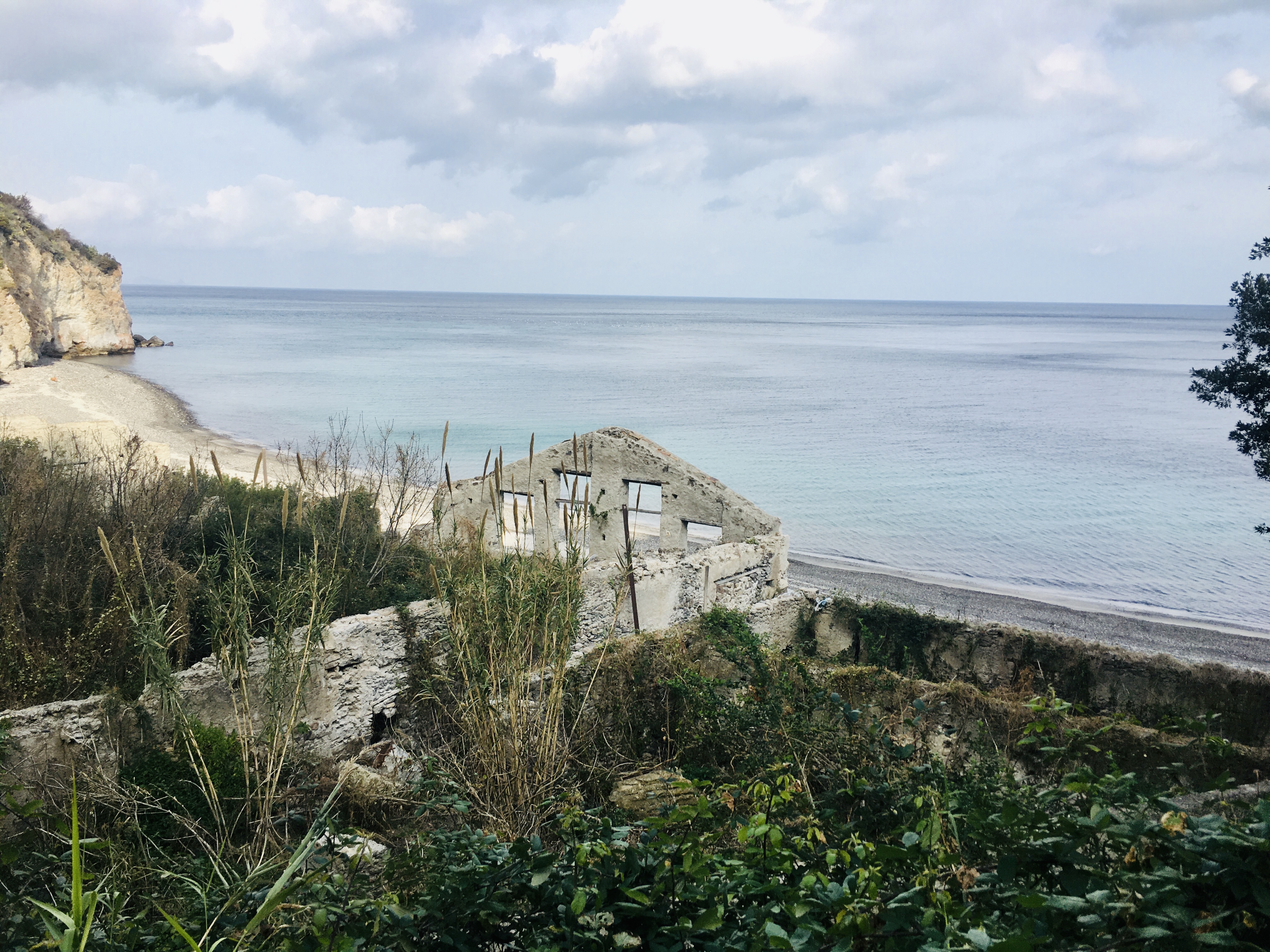 I immediately started to feel uncomfortable, and my mind started wandering:

It's wildly irrational, there's nobody there. But I'm reminded of when I was trekking in the Cameron Highlands in Malaysia, and a man sprang out of the bushes and flashed his penis at me. It didn't go any further than that, but I was so shaken up from the experience that I didn't dare walk alone while I was there.

If I sat and thought about this for any length of time, it would inevitably make me feel angry and resentful. The compromises we have to make and the extra precautions we have to take to stay safe. But I choose not to waste my time wondering about the 'what ifs' yet remain vigilant about my personal safety.

One evening on Lipari I couldn't sleep. It occasionally happens when I feel like I have an excellent idea for a story, and I'm excited about researching it. I woke at 3 am, I tossed and turned, but I couldn't get back to sleep. I got up and started tapping away at my keyboard.

After a while, I stepped outside onto the small balcony in the pitch black. I could not believe my eyes. There were billions of magnificent stars and planets glowing above, shining brightly at me from their mysterious galaxies. I'm always filled with awe at the vastness of the universe when it's presented in all its glory.

I have never seen anything like it. Maybe I don't look up often enough, or perhaps it's because there are too many clouds in Yorkshire? I saw a shooting star for the first time in my life, and then I saw many more. I was still outside when the sun came up a few hours later. I saw a sunrise of dusky pinks, pale mauves, cornflower yellows, glimmering stars fading into the daylight, and I still had the whole day ahead to enjoy.

What a joy to be alive.

To get updated when the next post on Lipari is published and to receive honest, stimulating and absorbing stories to help us try and make sense of our world please get on my email list.

I talk about Being a Woman, Mental Health, & Female Solo Travel. 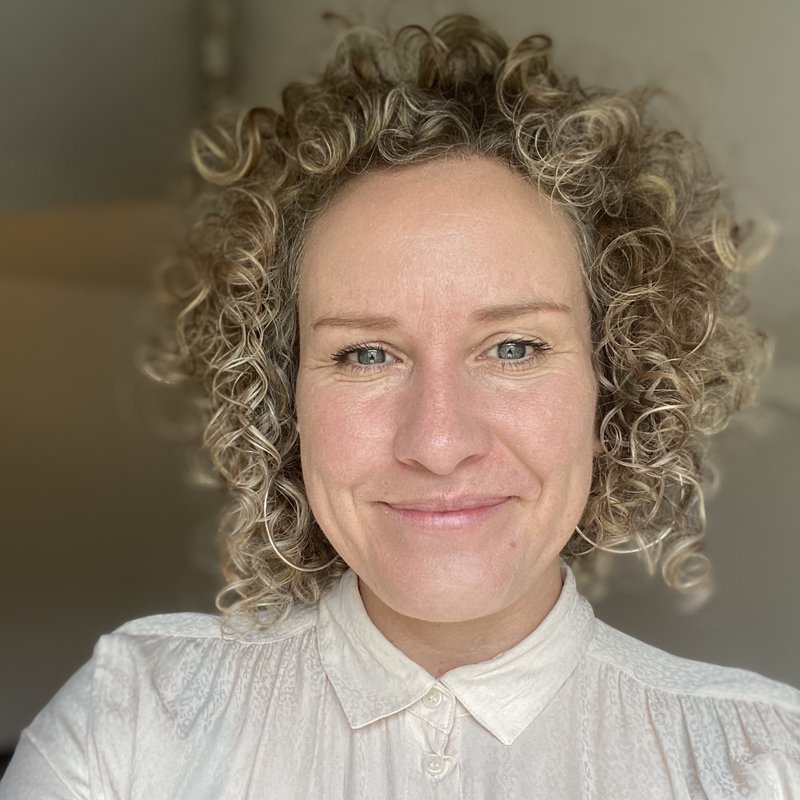